Who is the P.S. Warren Undergraduate Geological Society?

The P.S. Warren Geological Society is an undergraduate society at the University of Alberta not only for Geology Specialization/Honors students but students with an interest in the world of geology and those who wish they were in geology, as well as other EAS majors.
NEW: Join our discord! New for 2020, this is where our members can stay up to date with P. S. Warren happenings.

Throughout the year, we organize various networking and socializing events, such as “geo-mixers”, a Halloween party, the Christmas banquet (in conjunction with ATLAS, the geo grad students), and St. Patty’s Day! This year, we’ll be providing engaging virtual events for everyone to safely enjoy.

While we can’t organize our usual trips to conferences this year, many have gone virtual and are still offering excellent learning and networking opportunities. Our members have the opportunity to attend these conferences at a reduced cost.

And who can forget about grad?! We have a separate Grad Committee that is in charge of organizing everything for this great milestone in our university careers. Stay tuned for updates about Grad 2020. 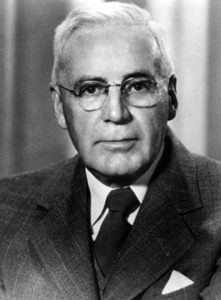 Percival Sidney Warren, the dean of Western Canadian stratigraphy, passed away in his eightieth year in Edmonton on February 23, 1970 after a brief illness. He had been associated with the Department of Geology at the University of Alberta for fifty years. His papers, and more importantly his lectures laid the foundation for the stratigraphy upon which most of the oil exploration in Alberta was based.

Dr. Warren was born at Brechin, Ontario on April 15, 1890. The brachiopods of outcroppings of Ordovician  attracted the young farm boy and his collections along the Trent canal gave him an early insight into natural history and a long-time love of fossils.

Growing up with his two brothers and two sisters in the farm environment, Warren learned the discipline and pleasure of work that never left him. He attended Orillia Collegiate and had decided to become a medical doctor, but ill health led him to take outside work on a survey crew in the booming mining camps of the Cobalt area. Here again geology attracted him, so that he turned to teaching school for several years to finance himself through University. His education was interrupted by the First World War and he went to Europe as a member of the 26th Battery of the Canadian Field Artillery. From the much at Passchendale, Warren was invalided out to England. This earned him the opportunity to attend the Khaki College at the University of London, and a chance to visit the classic stratigraphic sections of England.

Dr. Warren never lost his connection with the military scene and during the Second World War he was Lt. Colonel In Command of the Canadian Officers Training Corps at the University of Alberta. He continued to lecture in military geography and military history until many years after his retirement.

After receiving his A.R.C.S. (London) in 1919, he returned to Trinity College and obtained his B.A. from Toronto in 1920. His association with the great paleontologist, Dr. W. A. Parks, encouraged him to return to the University of Toronto to obtain his Ph.D. in 1924.

Dr. Warren joined the staff of the University of Alberta in Edmonton, as lecturer in 1920, as University was expanding and Dr. J. S. Allan doubled his staff from one to two to take care of the increase. Soon they were joined by a native Albertan, Dr. R. L. Rutherford, and for twenty-five years this remarkable trio represented geological education in Alberta. Warren rose through the academic levels to become professor of stratigraphy in 1934 and head of the Department of Geology in 1949. In 1955 he retired and became Emeritus Professor (although he continued to teach for many years) and Dr. R. E. Folinsbee, a former student, took over the headship of the Department.

Dr. Warren was a long-time chairman of the Men’s Athletic Board and a strong proponent of the intercollegiate sports. He never failed to turn up at the hockey games when the Geology team was fighting for victory or survival. His own athletic feats included cross-country running when he was young, and he later established the Warren Cup at the University of Alberta for this event.

He acted on the advisory boards of the Research Council of Alberta, helping to build it back into an important scientific center after the war.