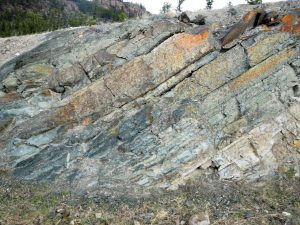 The field seminar will focus on a discussion of analytical techniques that could be used to better understand the studied units. Since this field trip will be outside the national parks, participants will be invited to sample lithologies that are of interest. Given outcrop access, the field trip will be limited to 24 participants. The trip will leave from the front of the Professional Development Center at 8:00 AM on Sunday, June 9th and return to Banff by approximately 5:00 PM, 2 hours before the icebreaker. For those confirmed as attending please arrive in Banff by Saturday, June 8th.  For those interested in attending please register here on a first come basis. The cost will be $75/person (including transportation and lunch). 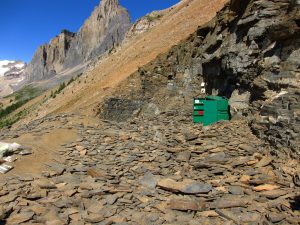 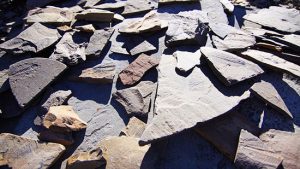 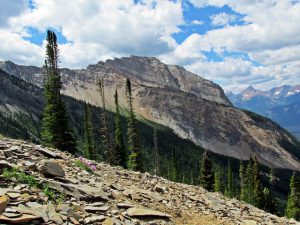 Made famous by the early exploration and collection of fossils by Charles Doolittle Walcott, the Walcott quarry sits on the shoulder of Mt. Walcott in Yoho National Park. Across the valley from the Burgess Shale, lies the Mt. Stephen fossil beds - an excellent collection of Cambrian trace and body fossils, most notable for its well-preserved trilobites. Neither of these localities are accessible without escort by a licensed guide, as they are protected UNESCO world heritage sites. We have now arranged with the Burgess Shale Geoscience Foundation a field trip to the Mt. Stephen Fossil Beds (~$120/person, including a guided tour, bus and packed lunch) for Thursday, June 13th, immediately following the conference. Note: Due to trail conditions (i.e., avalanche hazards, seasonal road closures) access to the Walcott Quarry is not be available until early July. As a consequence of group size restrictions allowed at the sites, we are only able to offer 24 spots, which translates into two separate guided tours of 12 persons maximum. For those interested in attending please register here on a first come basis.

Both guided tours will leave together from the front of the Professional Development Center at precisely 7:15 AM on Thursday, June 13th to meet the guides from the Burgess Shale Geoscience Foundation at the visitor center in Yoho National Park by 8:30 AM. The first tour will depart at 8:30 AM and the second tour will depart at 9:00 AM. Both tours will return to Banff by approximately 5:00 PM.

Note: Prime hiking season in Banff, Yoho, and Kootenay National Parks are generally from early July until mid-September. Although trails in the valley bottoms may be in excellent condition in June, alpine trails such as the Mt. Stephen trilobite beds may be subject to early season conditions. Early season conditions may increase the difficulty of hikes or make trails impassible and can include, snow (and associated avalanche risks), snowmelt, mud, and/or recent trail obstructions. Come prepared for potential early season conditions, as well as temperatures that can fluctuate between near freezing to upwards of 20ºC during the day, and between valley bottoms and alpine passes. For more information on the Burgess Shale and Mt. Stephen Fossil Bed Hikes see: http://www.pc.qc.ca/eng/pn-np/bc/yoho/activ/burgess.aspx and https://www.burgess-shale.bc.ca.

Other good photos for Mt. Stephen: