Two years ago, Bloomberg published an article “Here’s How Electric Cars Will Cause the Next Oil Crisis” https://www.bloomberg.com/features/2016-ev-oil-crisis/

The article circles around the idea that when enough electric vehicles (EV) displace gasoline-powered vehicles, an oil glut will hammer the oil and gas industry and the “Big Crash” will occur. They used 2 million barrels oil displacement by EV (similar in size to historically recent gluts) as a threshold. Bloomberg’s model is presented in their chart below. 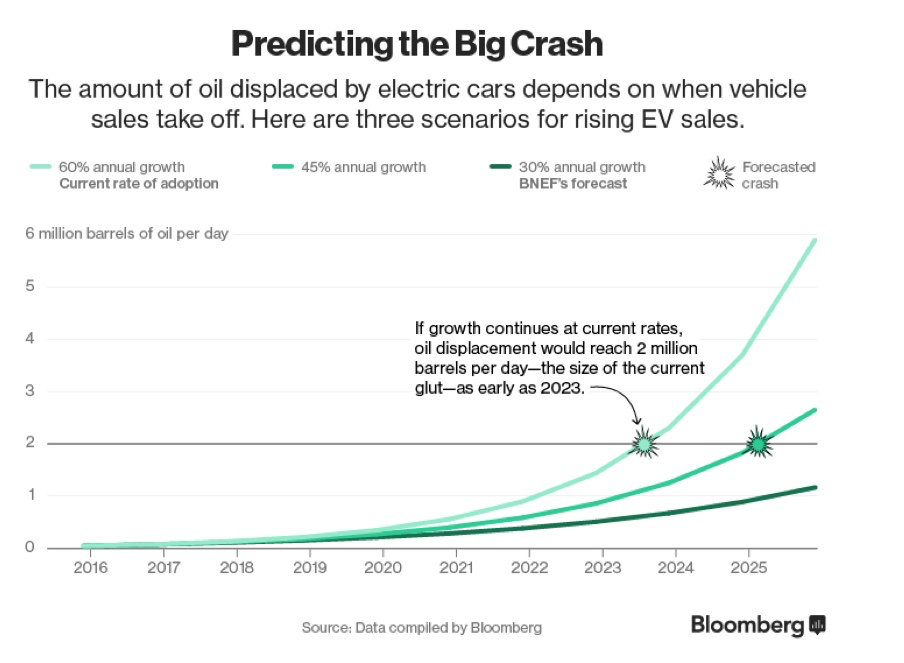 In short, if EV adaptation continues at the rate shown (and it has) the offset in oil demand will be significant enough to put downward pressure on oil prices by 2023 / 2024. This is oversimplified thinking. Firstly, this has to assume, then, that we have reached peak-oil demand. What factors suggest that is entirely wrong? For starters a notable drop in oil discoveries in 2017 will mean that production of oil gas is likely to start slipping 10 years from now. Secondly, total energy demand will continue to increase as economies modernize globally with oil and gas likely to be positioned as the majority energy source for at least the next 40 years (almost all the think tanks agree on this). So, when does oil demand actually peak? That is difficult to forecast, but that moment is more like 15 years from now, and maybe as far off as 40 years from now. So, give me a break.

Which leads me to my EV rant. If EV are not burning gasoline, then what resources are being used when people hop in their Tesla? Well, in 2016, natural gas was the largest energy source for electricity generated in the United States. Natural gas was the source of about 34%. Coal was the second-largest energy source for U.S. electricity generation in 2016—about 30%. Canada is a little different, hydro power produces close to 60% of Canada’s electrical production, followed by fossil fuels at 28% and nuclear at 12%. By my reckoning, EV still burn hydrocarbons, and in Canada contribute to something I loath, the giving up of river valleys to artificial lakes for “free” hydro power. I agree with fighting climate change, but the real solutions are greater efficiencies in energy use and carbon capture. Let’s not kid ourselves about solutions that do not solve anything.