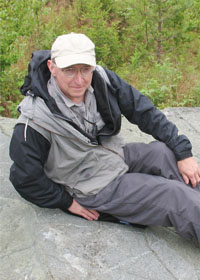 My research into diamonds started in 1978, when I was introduced to detrital pyrope garnet and chrome diopside without a known source on anthills in Wyoming. These two important minerals are tracked by diamond explorers back to their igneous host rock, in the hopes of finding a commercial diamond deposit. Finding the source of these minerals became my M.Sc. topic, and my introduction into diamonds and diamond exploration. Since then I have enjoyed a lively career in the continued pursuit of finding diamond mines, and resolving diamond genesis. In particular the links between diamond and kimberlite genesis, and hydrothermal activity in the mantle associated with plate tectonics are of most interest to me. These links can often be resolved at the scale of a single diamond or an inclusion in diamond, which makes my association with the Diamond Research Group all the more exciting.